While heading down Pattison Avenue toward the ballpark for Jackie Robinson night at the Phillies, I found myself behind some guy in a green t-shirt advertising Casper’s Place on Cottman Avenue.

The cartoon ghost on the shirt is shown saying, “No spooks allowed.” 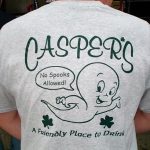 Please don’t tell me it’s an innocent joke; I’m not stupid. Only a dipshit wears a shirt like that. It’s easy to chalk it up to just one of those things, but I still wonder: How, in the 21st century, does anyone who conducts business with the public even think of printing a t-shirt like that? Honestly, the city Human Relations Commission nearly shut down Geno’s Steaks for less.

Until I hear otherwise, I’ll just assume the answer is, “Because I’m a racist asshole.”