During our conversation, we enjoyed glasses of fresh Gold, the Helles lager. It was the brewery’s first great beer (though I recall a version called Export Gold that might’ve been even better), and it’s still as good as ever. Damn, I’m going to miss that beer.

Afterwards, I wandered around the brewery with our film crew. I’d been there dozens of times dating back to the late ’80s. All those early beer festivals, the drives out the Turnpike just to pick up cases of those clunky 25-ounce bottles packed in plain white boxes – great memories. It was sad knowing that this would be my last look.

There’s still some beer in the tanks, but when it’s gone, it’s gone. (Except for whatever small batches Carol makes for her husband’s Black Angus Restaurant, which will remain open.)

The brewer’s board (above) caught my eye. Brew dates… original gravity… yeast info… How many times had Stoudt’s brewers scribbled notes on this dry erase board? And not just Carol and her husband, Ed, who were the living symbols of this place. But so many others who spent hundreds of hours milling grain, stepping over hoses, running the bottling line and always cleaning, cleaning, cleaning. Bill Moore, Jodi Stoudt, Brett Kintzer, Justin Lee, Kyle Price, Marc Worona, John Matson, Tom Rupp, and others whose names I’ve forgotten or never knew.*

The final batch at Stoudt’s is #7155 – noted simply on the dry erase board (above) as ESB.

That’s Scarlet Lady, of course – named after the red-headed queen of Pennsylvania brewing herself. A fine way to go out. 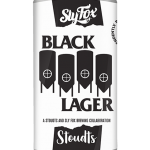 Meanwhile, you can still grab sixpacks, bombers and growlers of Stoudt’s at the brewery itself. There will be plenty of beer for a couple of months, though I’m told the excellent Triple on draft at the Black Angus is nearing the end.