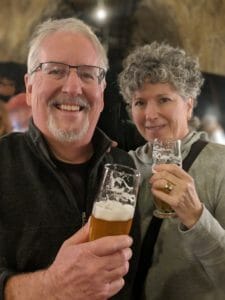 The ultimate beer lover’s trip takes you along the Rhine to some of the world’s great beer capitals. We’ll enjoy authentic kolsch in Cologne, outstanding French versions of German-style lagers in Strasbourg and the amazing Dutch beers of Amsterdam. We’ll even drink up in a windmill brewery!

IF THERE IS A MOTHERLAND for American beer drinkers, it is Ireland.

True, our brewing heritage might reach back to Germany or England, and we seem to have a soft spot for Belgium. But our drinking chops come straight from Dublin, and if you don’t believe me, get off your butt today on St. Patrick’s Day, the national holiday of … Read the rest

I’m a firm believer that there’s no better way to discover a new town than from a bar stool, and that was never better illustrated than my trek last weekend to north-central Pennsylvania.

This big-city boy has lived in Philadelphia nearly his entire life, never bothering to venture a mere two hours to the small towns that cling to the … Read the rest

LAST WEEK’S column focused on beer travel overseas. Of course, you don’t have to go that far this summer. Right here in the good ol’ U S of A, there are plenty of beer-centric travel destinations. Indeed, regional tourism agencies have set up easy-to-follow travel guides from New England to Southern California.

These ale trails are more than just your … Read the rest

THIS IS my year for beer travel, with group tours planned to Germany, the Czech Republic, Hungary and Austria, as well as several Eastern U.S. destinations. I got things started earlier this month by leading about 150 beer lovers on a very cool river cruise to the Netherlands and Belgium.

Eight breweries, two lectures, a beer dinner and many onboard … Read the rest

WHEN THE SUN is swallowed all day by gray skies and gloom, when the streets turn black with week-old slush, when even double IPAs taste like rock salt, a Philadelphian can’t help but think about getting out of town. Here are 10 beer-soaked destinations to consider:

TO THE roll call of venerable U.S. foreign diplomats, we can now add this signature name: Joe Sixpack, beer emissary.

I’ve just returned from my first mission on behalf of the U.S. State Department, a beer-soaked education and cultural exchange tour of Lithuania.

I’m happy to report that I did not ignite any international incidents.

In fact, judging from my … Read the rest

GOT A BEER mule in the family?

You know, someone traveling out of town this summer who’s willing to lug back a few bottles?

Then, I have a list for you. These are the gems you can’t buy in the Philadelphia area – top-rated brews that you might’ve read about but never tasted because they’re simply not shipped our way.… Read the rest

MUNICH’S OKTOBERFEST is either mankind’s lowest form of depravity, or its highest.

I’m just back from a few nights in the festival’s famed brewery tents – during which I enjoyed everything from too many liters of lager to the cacophony of a Bavarian folk band’s version of the White Stripes’ “Seven Nation Army” – and I can’t decide.